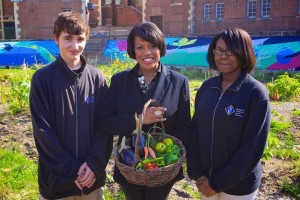 Baltimore City, Maryland: A Food in all Policies Approach in a Post-Industrial City

Baltimore City, Maryland faces many of the same food system opportunities and challenges of other post-industrial cities, but the municipal government is aggressively pursuing a “food in all policies” approach by engaging agencies throughout the city. This feature highlights the initial efforts that established this approach, including an effort to institutionalize intergovernmental collaboration, and a few of the subsequent policies aimed at improving food access and supporting urban agriculture throughout the city.

Located in the Mid-Atlantic and in close proximity to Washington DC, Baltimore City is home to approximately 622,000 residents. The city is a majority-minority city: approximately 63% of the population is Black, 32% white, and 5% Hispanic or Latino.[1] Like most post-industrial cities, Baltimore City experienced a significant population decline and subsequent economic decline over the past 50 years. The city has lost approximately 300,000 people since 1960.[2] Today, Baltimore City is home to more than 16,000 vacant properties. Approximately 23.8% of the population is below the poverty level, compared to 9.8% for the state of Maryland. And the median household income is considerably lower than the state level: $41,385 versus $73,538, respectively.[3] About 1 in 5 residents live in food deserts or areas “where the distance to a supermarket is more than ¼ mile, the median household income is at or below 185% of the Federal Poverty Level, over 40% of households have no vehicle available, and the average Healthy Food Availability Index score for supermarkets, convenience and corner stores is low (measured using a modified Nutrition Environment Measurement Survey).”  One of the biggest health challenges facing residents is access to healthy and affordable food.

Despite these challenges, the municipal government took significant planning and policy steps to improve the health and well-being of its residents. In 2009, then mayor Sheila Dixon established the Baltimore Food Policy Task Force, made up of various stakeholders including the health commissioner and the Planning Department’s Director of Research and Strategic Planning. This task force identified 10 goals and a series of recommendations. Based on the recommendations of the Baltimore Food Policy Task Force, Mayor Stephanie Rawlings-Blake established the Baltimore Food Policy Initiative (BFPI), and hired a full-time Food Policy Director with the support of the funding community. In 2009, Baltimore City Council adopted the Baltimore Sustainability Plan, which included a goal to establish Baltimore as a leader in sustainable local food systems as a way to increase access to healthy food. This investment and desire for an integrated and holistic approach has enabled the municipal government to pursue the idea of “food in all policies” by engaging many municipal government agencies. Listed below are these landmark efforts:

Baltimore Sustainability Plan, 2009. In March 2009, Baltimore City Council adopted a new sustainability plan that articulated a vision for the city, placing an emphasis on social equity, economic health, and environmental stewardship into the decision-making process. This plan established an overarching direction on sustainability issues for the city while providing a long-term vision and goals for how to make Baltimore more sustainable. The plan identified several important issues—one of them being food access—which has provided direction for developing programs and policies related to food access. This plan was later adopted as an element of the city’s Comprehensive Master Plan.

In addition to local policy, BFPI has leveraged its voice to advocate for state and federal-level policy change. The role of the mayor has also been critical to BFPI’s success. Mayor Rawlings-Blake along with other political champions have added legitimacy to the work of BFPI and elevated its profile and work to a national audience.

Since its creation in 2009, the BFPI initiated or supported a number of food-access related policies, programs, and projects. Listed below are a few of these efforts:

Food Access Mapping. The BFPI works closely with its municipal partners and Johns Hopkins University’s Center for a Livable Future to measure and monitor the status of the city’s food environment. This includes mapping of neighborhoods with low access and developing a better understanding and more accurate definition of food deserts. According to the BFPI, “these maps are essential…because they define the areas of greatest need, track progress, and help to better inform policy recommendations that aim to increase access to healthy foods in and around food deserts and to improve the overall food environment in Baltimore City.”

Baltimarket, 2010. Under the BFPI umbrella, the Baltimore City Health Department developed a suite of community-based food access and food justice programs. Baltimarket envisions a Baltimore with communities that have equitable access to healthy, affordable, and culturally-specific foods every day. One aspect of the program is a virtual supermarket that uses an online grocery ordering and delivery system to bring food to neighborhoods with low-vehicle ownership and little access to healthy foods. Qualifying neighborhood residents can place their grocery orders at a local library branch, school or senior/disabled housing site and/or from any computer or device that has internet access. Payment can be in the form of cash, credit, debit or SNAP.

Expansion of SNAP Benefits at Farmers Markets, 2014. Baltimore is participating in a pilot project with the United States Department of Agriculture to integrate Supplemental Nutrition Assistance Program (SNAP) benefits and wireless devices. If fully adopted, the use of wireless devices will allow for the acceptance of SNAP benefits at all Baltimore farmers markets.

In addition to tackling food access issues head on, the municipal government supports urban food production as an important strategy to reclaim and reuse vacant property in a productive way that contributes to the social, economic, and environmental health of the community. Since 2009, the municipal government developed a number of policies to support urban food production. These include, but are not limited to:

Land Leasing Initiative, 2012. Through the Land Leasing Initiative, the Baltimore City Office of Sustainability provides long-term leases for city owned vacant land to prequalified farmers. There are 5-year leases with a 2-year notice to vacate (dependent on farm type), at a rate of $100 a year and funding available with initial capital costs. No tax is imposed on non-profit farms and for-profit farms are eligible for tax breaks.

Homegrown Baltimore, 2013. In late fall 2013, the municipal government adopted Homegrown Baltimore, an urban agriculture plan with an aim to increase production, distribution, sales and consumption of locally grown food within Baltimore. This plan offers 25 recommendations for improving the local food system in the city. A key imitative that came out of Homegrown Baltimore identifies vacant lots within city limits that are available to farmers to grow and sell food on a five-year lease.

Health, Zoning & Building Codes, 2012-2013. Between 2012 and 2013, the municipal government revised its health, zoning, and building codes to better support urban agriculture. The Baltimore City Health Code was revised to allow the raising of chickens, mini goats and ducks within city limits. The Baltimore City Building Code was revised to allow for the construction of coops to maintain small fowl and hoop houses to improve season extension and the economic viability of farmers. And, the Baltimore City Zoning Code was modified to designate specific spaces for both food production and food distribution, and allow for growing and selling in the city, either from a farm or community garden.

Urban producers continue to face challenges related to water access, soil contamination, and lack of awareness among the general population about the benefits of urban agriculture. Efforts are being made to remedy these issues including a Garden Irrigation Fund through Homegrown Baltimore and a city produced Soil Safety Policy to guide responsible use of potentially-contaminated soil. The increases in demand for urban agriculture have also created economies of scale whereby farmers are interested in larger lot sizes than the city can provide.

Baltimore has many policies and initiatives aimed at improving food production and ensuring that those who need it most benefit from the increase in local food. The city’s “food in all policies” approach is an example for others to follow. These efforts and successes can guide other post-industrial cities in a quest to promote health and well-being for all residents.

In addition to the above policies, Baltimore has a suite of policies and supports a variety of programs and projects designed to help the city achieve its goal of all residents having access to healthy, affordable food: