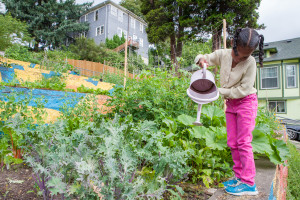 Through a combined approach of visionary leadership, long-range planning, departmental coordination, public-private partnerships, and public funding for innovative programs, the Seattle municipal government is taking a leading role in strengthening the regional food system. The following feature highlights a few of the municipal government’s landmark efforts to improve access to healthy food for its residents while simultaneously improving the viability of regional agriculture.

Seattle is located in the Puget Sound region, an agriculturally rich area in the Pacific Northwest. The region produces a wide range of agricultural products, including fruit, vegetables, berries and grains. The city itself has a long and robust history of backyard and community gardening. Since the inception of the P-Patch Community Gardening Program in 1973, there has been strong public support and enthusiasm for urban food production. The public continues to value the educational, social and ecological benefits of urban agriculture, particularly its ability to unite and educate residents, improve societal understanding of what it takes to grow food, provide ecological services, and connect immigrants with the greater community.

Despite these strengths, the cost of land and water, and the lack of large, contiguous parcels of urban land create challenges to profitable in-city farming. The cost of land and issues related to drainage and farm infrastructure create challenges for farmers throughout the region. There are many support services for farmers in the region, but there is a need for business support and access to capital.  While there are several strong, small networks of food systems stakeholders in the city, a larger, more coordinated network where stakeholders can more fully share resources does not exist. While most of the city has very good access to healthy food and culturally appropriate foods, physical and economic access to healthy food continues to be a challenge for low-income residents – for those with and without cars. As a result, access to affordable, healthy food has emerged as a critical issue in the city.

“With over 80% of the US food consumers living in cities, it is more important than ever for cities to take action to make healthy, sustainably produced food the norm, rather than the exception, in our cities.  Seattle’s goal is that all people have access to healthy, affordable, sustainably produced food, and we are taking steps with our partners in the region to make that goal a reality,” said Sharon Lerman, Food Policy Adviser for the City of Seattle Office of Sustainability and Environment.

Over the past 6 years, the municipal government has developed a number of coordinated plans, policies, programs and projects to tackle these challenges. Listed below are a few of these.

Local Food Action (LFA) Initiative, City of Seattle Resolution 31019. In 2008, the city council adopted and the mayor signed a resolution enacting the Local Food Action Initiative. The initiative established a core framework for food related policies in municipal government, and provided direction and authority to municipal government departments to work on food issues. Most importantly, the initiative institutionalized food as an important municipal government topic and led to the creation of (1) an interdepartmental food system team to coordinate food systems efforts, and (2) a food policy coordinator position to allow deeper city work related to food systems.

Seattle Food Action Plan. Building upon the momentum created by the LFA initiative, the Seattle Office of Sustainability and Environment and the Seattle Food Interdepartmental Team developed a stand-alone food system plan – the Seattle Food Action Plan. In 2012, the city council adopted this citywide plan that established an overarching food policy for municipal government, by providing guidance to all city departments on the development of specific strategies to achieve the higher-level goals of the LFA.

In addition to these landmark policies, the municipal government developed and provided funding for two innovative programs that aim to improve food access for low-income residents, while supporting regional farms.

Fresh Bucks Program. The Fresh Bucks Program was established by the Seattle Office of Sustainability and the Environment in 2012 to increase the buying power of food stamp recipients by matching up to $10 spent at one of the city’s 21 participating farmers markets or farm stands. Similar to other farmers market incentive programs across the United States, this program was initially established with private funding; however, due to its success, the municipal government now contributes approximately 80% of the budget (or $200K) from the general fund and provides staff time towards management of the program.

Farm to Table Partnership Project. Rather than instituting a local food purchasing requirement for the 300 plus child care and senior meal sites that use city funding to purchase and prepare food in some of Seattle’s most under-served neighborhoods, the municipal government intentionally decided to develop the Farm to Table Partnership Project, which provides technical support and assistance to link these sites with local farms for the purpose of providing access to healthy, local food. Funded in part by the municipal government, the project focuses on identifying and developing sustainable purchasing models for fresh local produce, and providing meal program providers with necessary education and training to implement the purchasing models and make changes to their meal preparation to incorporate seasonal, from-scratch foods. This project is considered a necessary step to help test the feasibility of a local food procurement policy within the City.

Armed with an understanding that food system issues extend beyond jurisdictional boundaries, in 2013 the municipal government of the City of Seattle entered into a public-private partnership to support the greater King County food system.

King County Farms and Food Roundtable. This roundtable is a collaborative initiative between the Pike Place Market Preservation and Development Authority (PDA), the City of Seattle, and King County to identify strategies to preserve farmland, increase food production, and expand farm to consumer marketing opportunities in King County. This public-private partnership takes a systemic, holistic approach to addressing key food systems issues, including food access. In June 2014 the roundtable released a report detailing their recommendations for preserving additional farmland in the county and increasing market and distribution opportunities for local farmers.