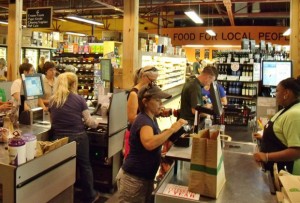 In Vermont, a strong Dillon’s rule state and one of the most rural states in the United States, a combination of state, regional and municipal-led planning and policy initiatives are paving the way for food systems change in Chittenden County. State entities – including the Health Department and the Vermont Sustainable Jobs Fund, and local entities – including the Chittenden County Regional Planning Commission (CCRPC) and the City of Burlington municipal government, are actively engaged in improving access to healthy food, supporting food production and related farm enterprises, food processing, and workforce training. These entities have employed various policy and planning levers to support and enable the innovative food systems work of leading non-profits and organizations in the community.

Chittenden County is located in northwestern Vermont. About 350,000 acres in size, the diverse landscape includes a mix of farms, forests, water bodies, small cities, suburban areas, and villages.[i] Home to approximately 160,531 residents, or about 26% of the state’s population (626,562), it is the state’s most populous county.[ii] Of its 19 municipalities, the City of Burlington is the largest in the county, as well as in the state, with 42,211 residents.[iii] Buels Gore is the smallest with 30 residents.[iv] The state’s largest higher education institution, University of Vermont (UVM), is located in Burlington. UVM includes 9,958 undergraduates, 1,371 graduate students, 459 medical students and 1,364 full- and part-time faculty.

As a Dillon’s Rule state, Vermont state government dictates the powers and authority of local governments. According to the Vermont League of

Cities and Towns, “despite its tradition and reputation of direct democracy and robust local control, Vermont has one of the most centralized governments in the country.”[vi] Both municipalities and counties in the state are limited in their powers to affect community change. Dissimilar to county governments in most U.S. states that provide a range of services related to transportation, health, parks, planning, law enforcement, education, etc., Vermont county government functions are limited to providing minimal services to the courts, and sheriff’s and high baliff’s offices.[vii]  As a result, state government agencies, regulations, initiatives and programs more directly influence municipalities than in other states.

Chittenden County has a long history of agricultural production. Its 587 farms[x] primarily produce dairy and vegetables, as well as beef, berries, and maple syrup[xi] and nearly 200 farms market food directly to consumers.[xii] Between 2007 and 2012, the number of farms decreased by 1%, while the acreage of farmland and the average size of farms decreased by 12% and 11%, respectively. Despite these decreases, the average market value of products sold per farm increased 26%: from $56,958 in 2007 to $71,951 in 2012.[xiii]

County farmers face a number of challenges including access to land, markets and certified processing facilities, difficulty competing with mass-produced products from other areas in the country, and retaining farmland in face of development pressures. There is often greater monetary value in developing farmland rather than maintaining it as a farm. Despite these challenges, Chittenden County residents are very supportive of locally produced goods, including food. There is great community support for farmers markets, farm-to-institution programs, and farm-to-restaurant activities. Chittenden County is also home to the Northeast Organic Farming Association of Vermont, one of the oldest organic farming associations in the United States; the UVM Food Systems Initiative that promotes food systems research, teaching, and outreach;[xiv] the Intervale Center – 350 acres of privately and publicly owned agricultural land in Burlington and a publically supported farm incubator (see section below for more information); and extensive smaller scale community and backyard gardens. The farmers and gardeners grow a wide range of crops, vegetables, and flowers, and raise poultry, goat and pigs.

Obtaining access to farmable land is one of the county’s and city’s main food production challenges. The Burlington municipal government is trying to address this issue by providing plots and lease agreements for interested gardeners. However, finding arable land of a sufficient size remains a challenge for the city’s farmers. Frequent flooding, including on Intervale lands, also makes urban food production difficult, however a 2015 survey of Intervale farmers indicated that the benefits of farming in this area (access to a large market, good soil, and a community of supportive farmers) far outweigh the flood risks.

While the poverty rate in Chittenden County is lower than the national rate, it is increasing.  In Burlington, over 25% of the population lives below the poverty line, well above the state average of 11%.[xv] According to Hunger Free Vermont, about 1 in 7 children (or about 14%) in the county are food insecure. This figure is estimated to be a bit higher in Burlington. The county’s most underserved residents include low-income residents, children younger that school age that are not accessing the free breakfast or lunch programs offered by schools, and residents of parts of Burlington, the City of Winooski, and the Town of Milton. In Burlington, the city’s most underserved populations include primarily people of color, seniors, immigrants, and refugees. Burlington’s residents access both the Supplemental Nutrition Assistance Program (SNAP) as well as the Special Supplemental Nutrition Program for Women, Infants and Children (WIC) at rates of 15% and 12%, respectively[xvi]. Food access barriers in Burlington are exacerbated by a public transportation system that does not serve all parts of the city and only runs on certain days of the week.

Despite these challenges, municipal government, non-profit, and business actors within Burlington’s food system are mindful to locate food assets such as community gardens, farmers’ markets, and affordable grocery options in underserved areas. These locational strategies reduce food disparities. Burlington is also home to the City Market Onion River Co-op, the top grossing food co-op in the U.S., which has a strong affordability mandate. The number of ethnic food stores offering culturally appropriate foods is also growing. Immigrants and refugees have also benefitted from the Pine Island Community Farm’s Vermont Goat Collaborative, a partnership program between the Vermont Land Trust and the Association of Africans Living in Vermont that supports new immigrants in the raising and slaughtering of goats and chickens for meat.

To address the existing challenges, foster the community food system, create green and sustainable jobs, and increase access to healthy food, the CCRPC and the Burlington municipal government have taken important steps to plan for the future of their community food system. These actions have taken various forms including working directly with non-profit and community partners on policy innovations, offering staff support to community-based work, and integrating food system goals and actions into official plans.

Regional and municipal government staff helped launch and support a variety of food systems initiatives in collaboration with community.

Beyond the official plans already mentioned, the CCRPC and Burlington municipal government have supported area farmers throughout Chittenden County in a number of ways:

In addition to food production policy, the Burlington municipal government has used it urban land base towards achieving food access goals.

Other state and municipal government efforts to support community food systems work in Chittenden County include:

[xviii] Vermont Farm to Plate Plan, Chapter 2: Getting to 2020: Goals and Indicators, http://www.vtfarmtoplate.com/getting-to-2020