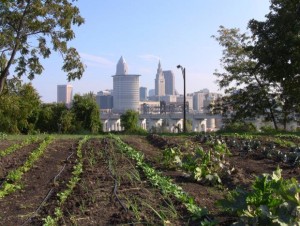 The Ohio City Farm is one of many urban farms in Cleveland promoting food access for residents and supported by city policy. Image Source: http://cccfoodpolicy.org/about

The City of Cleveland, located in Cuyahoga County, is home to 389,521 of Ohio’s 11,594,163 residents. Cleveland is a minority majority city with a 53.3% black population, a 10% Latino/Hispanic population, and a one third white population[1]. Like other industrial cities of the 20th century, Cleveland experienced major population decline and staggering property vacancies beginning in 1960.  Compounded by the 2008 recession, more than half the city population had left Cleveland by 2010[2].

Urban agricultural production in Cleveland is diverse, but focuses primarily on specialty crops such as fruits and vegetables. More and more producers are beginning to raise bees, chickens or ducks in the city. There is also potential to further develop egg and meat production in the city. The models of urban food production are as varied as the products including residential agriculture, community gardens, market gardens, as well as urban and peri-urban farms. Products are grown or raised for both personal consumption and/or commercial sale. Within the broader Cuyahoga County, demand for healthy food has increased alongside the growing number of people interested in urban agriculture. This demand and interest is mirrored by more opportunities for direct sales and marketing of local agriculture products in the county including more farmers selling directly to restaurants.

Residents face their own set of challenges in accessing healthy affordable food, urban grown or otherwise. These include a lack of walkable or transit-friendly grocery store or market options as well as limited incomes with which to purchase food. As a result, Cleveland residents – 35.4%[3] of whom are living in poverty – rely on corner stores, which tend to lack the capacity to stock healthy or culturally appropriate food. Low-income residents, seniors, and children are some of the most underserved populations in Cleveland and face significant food access challenges.

Despite the challenges, the Cleveland municipal government has been able to implement a number of policies and programs to support food production and improve food security in part because of ongoing multi-sectoral collaboration largely coordinated by the City of Cleveland and Cleveland-Cuyahoga County Food Policy Coalition. What began as support for a municipal community gardening program has over three decades evolved into a high level adoption of food systems thinking within Cleveland’s local government.

In the late 1970s, Cleveland’s municipal government began supporting urban agriculture with the inaugural Summer Sprout community gardening program. This was the first of several important policy efforts of the municipal government to increase opportunities for urban food production and improve food access within city limits.

Beyond urban agriculture, the City of Cleveland has also integrated broader food systems thinking into its policy, evidenced by the Cleveland Food Charter, close collaborations with the Cleveland-Cuyahoga County Food Policy Coalition, and the integration of food systems issues in the Re-Imagining a More Sustainable Cleveland Plan.

In addition to the urban agriculture and food systems policies highlighted above, the City of Cleveland boasts a strong collection of additional food production, food security, and other food policies: