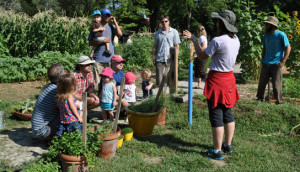 Gardeners gather at the Garden Incubator at John Taylor Park, one of the many community gardens that make up the City’s Common Ground program. Image Source: https://www.lawrenceks.org/sustainability/food

Healthy Food System in the Heartland: Intergovernmental Cooperation in the City of Lawrence and Douglas County, Kansas Advances Food Policy

In 2013, Douglas County was home to 114,803 people, of which 90,811 lived within the City of Lawrence—the sixth largest city in Kansas.[1] Lawrence is home to the University of Kansas (KU) and Haskell Indian Nations University, the only inter-tribal university for Native Americans in the U.S. About 28,000 students attend KU, and students from more than 150 Native American tribes across the country attend Haskell.[2] The majority of the population is white (82% in Lawrence, 85% in Douglas County). A significant number of residents, 22% in Lawrence and 19% in Douglas County, are living below the poverty line and have limited food access.[3]

Lawrence is home to a diverse range of urban agriculture projects focused primarily on vegetables as well as some fruit production and chicken-raising for eggs. The city and county experienced a recent growth in direct local food sales marked by an explosion of interest in local farmers markets and the desire to re-localize the food system. There are about 90 vendors at the downtown Lawrence farmers market alone and between 10 and 40 vendors at five additional farmers markets across the county. The local food cooperative grocery store in Lawrence– the Community Mercantile or Merc – provides stability for farmers; in 2014, the Merc purchased approximately $1.3 million in local food. Over a dozen restaurants within the county also eagerly stock, market, and sell local foods to consumers.

Despite these opportunities, several economic, ecological, and cultural challenges inhibit food production. For example, the best soils are on land that has already been developed or is under significant development pressure. This results in high land costs per acre, a major barrier for new farmers. While direct market opportunities are plentiful, farmers wishing to sell wholesale face a lack of infrastructure. There are limited food processing businesses, distribution channels, vegetable packing warehouses, and aggregation facilities within the region for local small to mid-scale growers, preventing farmers from scaling up and selling to institutional buyers. Some, very motivated chefs and grocers, develop one-on-one relationships with farmers selling at farmers markets and negotiate directly with them. This arrangement, however, does not work for large, institutional buyers.

Some of the biggest food security challenges facing the city and county are limited access to food retail, limited access to healthy food, and the limited affordability of local foods. While there is a wide spectrum of grocery retailers within the county, not all stores stock locally produced items or a large range of healthy food items and most of them are geographically concentrated in Lawrence and other nearby cities. Limited availability of proximate food retail requires owning a car, or having access to a car, for grocery shopping. Additionally, countywide Supplemental Nutritional Assistance Program (SNAP) participation rates are very low – only about 27% of eligible people apply for and receive SNAP benefits.

Through a unique collaborative model, the Lawrence and Douglas County governments have developed a number of policies, programs, and projects both in partnership with one another and as separate governing entities to address many of these challenges and build on opportunities. Some of these specifically focus on food production or access to healthy food, however a few programs and policies take a comprehensive and holistic approach to addressing these issues and consider the linkages between the two.

Horizon 2020 Plan, 2009. In 2009, the county and city governments adopted an environment chapter to a joint comprehensive plan, which includes a food system component providing direction and a framework for subsequent county and city food systems initiatives. The plan is currently being updated under the leadership of a steering committee. The update process involves extensive community consultation, including with food system stakeholders such as the Douglas County Food Policy Council. Local food is one priority issue that is being considered by the steering committee.

Douglas County Food Policy Council, 2010. The food policy council is a joint city/county council that was established in 2010 by the county government and joined by the city government in 2013. Two staff positions, the Sustainability Coordinator and the Food Systems Coordinator, provide staff support. The council has been instrumental in providing policy advice to both the city and the county governments on a variety of public projects, policies, plans, and programs.

Food Policy Paid Staff Positions, 2010 & 2015. In 2010, the county government established a full-time Sustainability Coordinator paid position. Funding for the position is provided 60% by the county and 40% by the city. About 25-30% of this position is devoted to food systems work including working closely with the Douglas County Food Policy Council and the Lawrence-Douglas County Health Department. The Sustainability Coordinator is a liaison between policymakers and citizens, often helping the latter navigate the policymaking process. The position has a holistic mandate including transportation, water, economic development, and other sustainability issues along with a primary focus on energy and food systems.

And more recently in 2015, with funding from the Center for Disease Control and Prevention, Lawrence and Douglas County established the Food Systems Coordinator position. This position reports to the Sustainability Coordinator and works largely on policies and programs around food access and healthy food initiatives, especially for youth and low income residents. This position works closely with the Douglas County Food Policy Council, city and county staff, and other food system stakeholders.

Food Systems Studies, 2011 & 2014. The county and city governments commissioned two important studies: the Food System Analysis in 2011 and more recently the Food Hub Feasibility Study in 2013/2014. The food system analysis provided the region with a better understanding of its food systems strengths and weaknesses, including the lack of supportive food systems infrastructure – particularly distribution, storage and packaging infrastructure. This led to the Food Hub Feasibility Study, which explored the feasibility of establishing a food hub within the region to provide the necessary infrastructure to enable small and medium-size producers to sell their product to large institutional markets, such as schools. A team of representatives from Douglas County and the adjacent Kansas City Metro Region is currently implementing recommendations from this study, including the development of a business plan for a food hub.

Indigenous Food Day Proclamations, 2011. Since October 2011, the Douglas County Commission has passed a proclamation to designate a specific day in October as Indigenous Food Day. These proclamations highlight the socio-cultural importance of food, acknowledge the contributions of the local and regional farms and food producers to the physical and economic health of the community, and recognize the heritage and food traditions of the region’s indigenous populations.

Common Ground Agricultural Program, 2012. Established by the Lawrence municipal government in 2012, this program leases vacant city-owned property to gardeners and farmers. The program currently includes an incubator farm, a teaching farm, several community gardens, and a free you-pick orchard. In addition to land, the municipality helps prepare each site by providing water access and other supportive infrastructure. In exchange for free access to land, lessees provide a Community Benefit Plan with their application detailing how many pounds of produce they will donate to food banks and numbers of workshops they will host, for example.  Last year over 500 residents participated in growing food or educational programs at these 8 Common Ground sites.

SNAP Market Match Program, 2014. In 2014, the Douglas County Food Policy Council garnered $25,000 in funding support from the City of Lawrence, Douglas County, and Livewell Lawrence, a coalition of community leaders aimed at improving people’s diets and physical activity, to create a dollar-for-dollar SNAP matching program at regional farmers markets. The pilot SNAP Market Match program launched in June of 2014 at 2 Lawrence farmers markets. The city and county matched $9,000 in SNAP benefits, equating to approximately $18,000 worth of sales for local farm vendors. In 2015, the program received $40,000 in funding support and is expanding to 5 additional markets in the region.

In addition to the policies summarized above, the City of Lawrence and Douglas County governments have a range of others that together tackle food production, food security, community health, farmland preservation, and other key food system challenges along the urban-rural continuum: