Home / Research / State of Food Systems Planning in the US

A national survey of local and regional government planners evaluates and describes the broad trends, shifts and patterns in food systems planning. 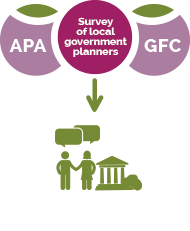 In order to better understand how Communities of Innovation strengthen their food systems, Growing Food Connections conducted a national survey of local government planners. This survey, which was conducted in partnership with the American Planning Association (APA), identifies the local and regional government partnerships, policies and associated plans that address food access and documents the extent to which these policies and plans have been implemented. The survey yielded measureable data that describes the broad trends, shifts and patterns in food systems planning.

The survey sample included lead planners, or their designees, working within local and regional governments across the United States. The sample was drawn from the APA’s national membership database of approximately 43,000 planners and the membership lists of the APA’s 47 state affiliates.

The survey instrument was based on instruments previously designed, tested and implemented by Co-Principal Investigators Samina Raja and Kimberley Hodgson. These survey instruments were used as the foundation for the current national survey structured around local governments’ engagement in policies and plans focused on strengthening food access specifically by connecting consumers to farmers.

Aggregated results from the national survey will be available in Autumn 2015.

This memo has been prepared to inform the Principal Investigators of the Growing Food Connections project about information gathered from the audience during the interactive exercise component of the APA conference session. The audience provided answers to the following three questions: 1. What research questions need to be answered; 2. What skills do planners need to develop in order to strengthen the connections between underserved residents and local agriculture; and 3. What are the most effective ways to engage community members and leaders to make this connection? The responses obtained from these questions are summarized in a narrative format.