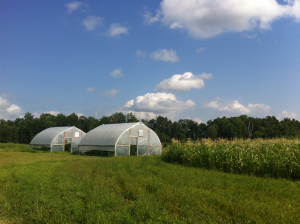 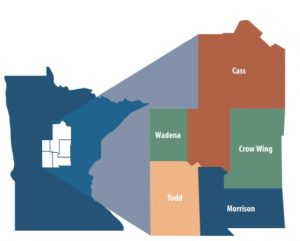 Building from the Inside Out in Region 5, Minnesota: A Rural Region’s Effort to Build a Resilient Food System

Rural food insecurity remains one of the most vexing challenges in the United States. In central Minnesota, Region 5 is emerging as a leader in using policy to address food insecurity and agricultural viability in a rural context. In face of high rates of unemployment, food insecurity, and poor health, Region 5 has built on its own assets to build a resilient region. Driven by a desire to improve its own community, and not solely relying on assistance from outsiders, many different governmental and non-governmental groups have come together to combat food production and food security challenges through lasting policy change.  As early as 2007, this rural region recognized the local food system as one of its strongest community assets and has made concerted efforts toward creating a regional food system that generates local wealth and provides access to healthy, affordable foods.

Region 5 is located in central Minnesota and consists of Cass, Crow Wing, Morrison, Todd and Wadena counties. Approximately 163,000 people live in this rural, 5-county region, including: 65 incorporated cities, 155 townships, 24 school districts, one Army Camp, one community college, and one tribal band – The Leech Lake Band of Ojibwa. Brainerd, located in Crow Wing County, is the largest city with about 13,425 residents,[1] and is considered one of the top 20 fastest growing micropolitan cities in the nation. Most of the region’s other cities have less than 500 residents. The majority of the region’s population and growth is centered in Crow Wing and Cass Counties. [2]

The majority of the regional population is white (about 95%) and of Germanic or Scandinavian descent. Many Ojibwe or Chippewa First Nation’s people reside across the region, and there is a growing Latino population in Todd County. Due to the location of a military and civilian training facility in Morrison County, Camp Ripley, there are also a number of former military service people in the region.

The U.S. financial crisis of 2007–2008 and subprime mortgage crisis of 2007–2009, had a significant negative impact on the region. According to the Region 5 Development Commission, “Region 5 is the only region in the State of Minnesota where all 5 counties are classified as economically distressed.” Todd and Wadena counties are considered to be the two poorest counties in the state of Minnesota. [3] A number of factors, including population migration, disappearance of family farms, pressure on natural resources, and high unemployment all contribute to the economic distress of the region.

The 5-county region produces primarily poultry and eggs, cow milk , cattle, turkeys, grains, dry beans and peas, and over 70 different varieties of vegetables. According to the 2012 United State Department of Agriculture(USDA) Census of Agriculture, Morrison County is ranked 1st in the state for poultry and eggs by value of sales, and 3rd in state for milk from cows by value of sales. Cass County is ranked 2nd in the state and 2nd in the United States for acres of wild rice. Todd County is ranked 8th in the U.S. for the number of turkeys it produces.  Wadena County also produces many different varieties of vegetables, including potatoes, and is home to a number of bee colonies.[4] According to the 2012 USDA Census of Agriculture, there were approximately 5,610 farms in the 5-county region, totaling about 1,236,500 acres.[5] While the average size of a farm was 227 acres in 2012, most farms are small, family-owned farms of 40 acres or less. Many of the farmers in the 5-county region are also Amish, Latino or American Indian.[6]

Despite the diversity of agriculture across the 5-county region, fruit and vegetable growers face a number of challenges. Due to its location in the northern part of the U.S., the region’s cold climate severely limits its growing season, requiring a need for season extension (such as hoophouses) to enable growers to stay profitable and earn a living throughout winter months. A 2008 survey of primarily small and mid-sized farms with annual farm incomes of less than $5K, conducted as part of the Central Minnesota Food Hub feasibility study, found that growers, including existing specialty crop producers, commodity growers, and new farmers, lacked the time to dedicate to farm work because of the need to have an off-farm, paid job.

Many of the producers surveyed also expressed the desire to expand sales to individual customers, businesses and institutions, and stated that their biggest challenge was connecting to buyers.[7]  While the largest farm-to-school program in the state of Minnesota is located in the region, small and mid-sized farmers find it difficult to provide enough local produce for the number of mouths to feed, about 12,000 students in 6 different school districts.[8]

Despite the agricultural wealth of the region, food is inaccessible and unaffordable for many people across the 5 counties. According to Cheryal Hills, Executive Director of Region 5 Development Commission, “There are serious health disparities within the region.” At least 10% of the population in all five counties are food insecure, with the highest prevalence occurring in Wadena County, where 13% of the population is food insecure. Over half of all children in Cass County (52%) and 42% of children in Todd County are also eligible for free lunch, compared to the state average of 30%. Of the 87 counties in the state of Minnesota, the 2015 Robert Wood Johnson Foundation County Healthy Rankings, ranked Cass County 86th, or second to last in the state, and Wadena County 81st for overall health. Morrison County was ranked 77th, Crow Wing County 59th, and Todd County 55th. [9]

Driven by a desire to improve its own community, and not solely relying on assistance from outsiders, government and non-government groups have come together to directly combat food production and food security challenges through lasting policy change in the 5-county region.

Choose Health, 2014. Funded by Hunger-Free Minnesota, Choose Health was designed and implemented by a public-private partnership of Lakewood Health System, Sprout, Todd County, University of Minnesota Extension, and Prairie Bay with R5DC acting as the program administrator. The program started as 6-month pilot project with $25,000 grant from Hunger-Free Minnesota, and is currently being sustained by hospitals and healthcare practitioners in the region through extended funding.

The Choose Health program provides healthy foods, recipes, food demonstrations and education to local families who have been identified as food insecure by physicians from Lakewood Health System. Participants go through an extensive process of pre and post health care screenings, receive nutrition education and recipes from the University of Minnesota Extension, alongside a concentrated community referral process and ongoing support offered by Todd County Public Health. Families receive locally grown and raised commodities bi-monthly from Sprout, the 5-county regional food hub of more than 70 local low-income growers. Initial pilot results showed an improvement in the amount of fruits and vegetables participant families are eating and having more access to fruits and vegetables, both indicators of improved health outcomes.

Sprout Regional Food Distribution and Processing Facility, 2016. Sprout, LLC is a food hub located in Brainerd. Established in 2013, Sprout coordinates a farm to school program for six school districts in central Minnesota and provides area restaurants with food from over 70 local producers. In an effort to implement food system related actions in the Resilient Region Plan, Sprout partnered with R5DC to open a regional food distribution and processing facility, called the Sprout Growers and Makers Marketplace, in Little Falls, MN in April 2016.

R5DC supported the Sprout Growers and Makers Marketplace development from the initial feasibility study to acting as a fiscal administrator to engaging stakeholders in the concept and design process. Public funds through USDA’s Rural Community Development Initiative and Minnesota Department of Agriculture grant funds have been utilized to support facility planning and build out. Through several other unique partnerships, funds were secured from untraditional sources such as the region’s purchasing Co-op; The National Joint Powers Alliance and the Little Falls Catholic Charities.  Sprout and their partners offer an example of how a rural region can develop market channels within the region to support local producers and connect the community to healthy foods. The Marketplace aggregates thousands of pounds of commodities for over 300 community supported agriculture shares; serves as a value-added agriculture processing facility for Sprout employees and local farmers; and provides space for the only indoor winter farmers market in upper Minnesota. Additionally, the Marketplace includes a demonstration kitchen, where health care providers and county health practitioners deliver food nutrition education classes, and a classroom that is utilized by partners who provide business education and technical assistance to growers and makers.

Microlending Program, 2012. Identified as a vital project in the implementation of the Resilient Region Plan, the North Central Economic Development Association (NCEDA), a 501c3 subsidiary of R5DC, developed a microlending program with a strong focus on agriculture producers and food artisans. NCEDA established the program in 2012 through USDA’s Rural Microenterprise America Program (RMAP) award and private foundation funds. Loans from $1,000 to $50,000 with a 3 – 7% interest rate are available for start-up and small businesses in a 10 county region, including Region 5’s counties. R5DC provides technical support and requires 25% owner’s equity injection and 1 job created/retained for each $10,000 lent.

In an effort to create a resilient region, Region 5 has focused on supporting its existing community assets, particularly the local food system. Collaboration across a variety of stakeholders, including the public realm, has led to creating a vision for the community’s food system and implementing strategies to achieve this vision.

In addition to the five main initiatives described above, the 5-county region (and many of its local units of government) have engaged in other local and regional (food?) activities including:

[8] The Farm on St. Mathias, http://www.thefarmonstmathias.com/sprout-mn-llc/farm-to-school/