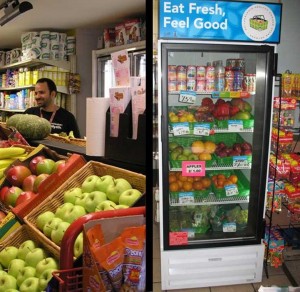 Beginning in 2008, the City of Philadelphia introduced a series of food policies – plans, regulations, and programs – to respond to the many opportunities and challenges facing its residents. Under the leadership of the Mayor’s Office of Sustainability and the Philadelphia Department of Public Health, one of the most impoverished cities in the United States now has a suite of food policies connecting food access challenges related to poverty with the city’s food production potential. This includes a food charter, food policy advisory council, as well as the inclusion of food systems in comprehensive sustainability planning and health promotion programming.

With a population of 1,553,165, Philadelphia is the biggest city in the state of Pennsylvania. It is also one of the most racially mixed cities in the state with over 43% black residents, compared to the state average of 10.8%. Asian, Hispanic, and Latino residents collectively account for 18.6% of the city’s ethnic makeup[1]. And, the city is a majority minority city; only 41% of the population is white. Although Philadelphia is now the fifth largest city in the US, its population experienced a marked decline towards the end of the 20th century following the downturn of its once thriving industrial sector. The city is still dealing with the significant number of vacant properties resulting from population loss, which total approximately 40,000 parcels.[2]

Philadelphia is located in the heart of the Delaware Valley region where agricultural production focuses on fresh fruits and vegetables, meat, poultry, dairy, and eggs. Complementing production is Philadelphia’s rich history of gardening, which dates back to the 1970s and 1980s. Today, the broader Philadelphia region has several small to medium sized farms focused more on the production of consumable products and less on commodity crops such as corn and soy. Within city limits, production focuses on fresh fruits and vegetables. Livestock is also permitted on city parcels over 3 acres. These agricultural opportunities are paired with urban density and therefore proximity to markets as well as a growing immigrant community with technical gardening knowledge.

Food producers in Philadelphia and the greater region face challenges due to a lack of local processing capacity, soil contamination, and limited access to water. Urban growers also find it difficult to be profitable. Oftentimes this means selling urban-grown food to restaurants rather than to food insecure residents, presenting a gap between local food production and food access. This is significant given that Philadelphia suffers from one of the highest poverty rates in the United States with 26.5% of households living below the poverty line[3] – a major challenge that is closely tied to food insecurity. Low-income residents, people of color, older adults, children, and people with disabilities are many of the populations struggling with food insecurity in Philadelphia.

Evidence of this is found in the 2013 Philadelphia Department of Public Health report which states that 307,000 of Philadelphians are living in neighborhoods with high poverty and limited access to healthy food retail[4].This is increasingly difficult for residents who depend on public transit to do their grocery shopping as public transit does not always connect with food retail destinations.  While the Southeastern Pennsylvania Transportation Authority (SEPTA), which provides public transit service within Philadelphia, is a partner on food system efforts, the authority is underfunded and therefore unable to adequately expand its service.

In the face of these challenges, Philadelphia has been able to implement a number of policies to support food production and improve food security. The municipal government has demonstrated a renewed interest in food systems policy, especially under the leadership of the Mayor’s Office of Sustainability and the Philadelphia Department of Public Health. Policies that particularly connect both food production and food security led by these two departments are highlighted below.

Leadership from the Mayor’s Office of Sustainability

After he was elected in 2008, Mayor Michael Nutter pledged to make Philadelphia the greenest city in America. The Mayor’s Office of Sustainability was created shortly after and champions several sustainability programs, including many related to local food, as well as the overarching Greenworks Philadelphia plan.

Leadership from the Department of Public Health

The City of Philadelphia’s Department of Public Health is responsible for several food policies under a chronic disease prevention umbrella. Along with work related to preventing smoking, health promotion and the prevention of chronic diseases are approached through a food and nutrition lens as part of the Get Healthy Philly program. Staff time for this program was originally funded under a Communities Putting Preventing to Work (CPPW) grant from the Centers for Disease Control and Prevention (CDC) and subsequently transitioned to a civil service position.

The City of Philadelphia has also developed several other food policies aiming to promote urban food production, food access, and other food system goals. These range from zoning amendments to programs, research, a staff position, and the inclusion of food priorities in municipal planning.