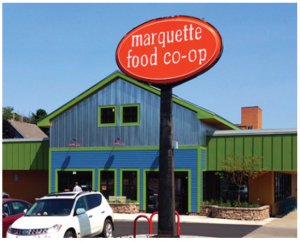 Marquette County, a small picturesque county located on the shores of Lake Superior in the northern part of Michigan’s Upper Peninsula (UP), has taken significant steps to strengthen its food system. The county is home to 22 local units of government – 3 cities and 19 townships ranging from the largest city of 21, 441 people – the City of Marquette – to the smallest township of 153 people – Turin Township.[i],[ii] The Marquette county government and several of its local units of government are actively engaging in planning and policy efforts across disciplines to establish a local food system that serves the community. From supporting the innovative work of key non-profit groups and businesses, like the Marquette Food Co-op, to adopting long-term, comprehensive plans, these local governments are laying the groundwork for future food systems change.

Most farms in Marquette County are small – approximately ¼ to 10 acres in size – and grow a mixture of vegetables and raise some animals. According to the 2012 US Agriculture Census, the average size of a farm in Marquette County has decreased by 12% between 2007 and 2012, while the number of farms has increased from 144 to 168.[iii]

One of the most diversified farming operations in the county is the Seeds and Spores Family Farm, located in Chocolay Township. The farm grows 10 acres of vegetables as well as shiitake and oyster mushrooms, raspberries, strawberries, apples and ginseng; and raises laying hens, cattle, pastured pigs and turkeys. The farm sells its product through farmers markets and a community supported agriculture (CSA) program.[iv] In addition to this farming operation, many homeowners grow vegetables and berries in their backyards.

County farmers face a number of challenges. The majority of farms (147 of the 168) gross less than $20,000 per year. Farmers face a very short growing season (June through September) and unfavorable soil types (83% of the county is forested and not suitable for farming).[v] In addition to these issues, the UP is vulnerable to drought. Due to the limited and scattered population in the region, transporting farm goods to population centers is also a challenge. Currently no organized transportation and distribution system for food exists in the UP. Beyond these challenges, the UP cannot sufficiently handle all the meat processing needs of UP farmers, especially for poultry and pork. Small and medium sized dairy farmers and vegetable growers also have no place to process and add value to their products.

Despite these challenges, there is a real demand for local products among consumers and institutional buyers, especially in the population centers of the county. Currently, not enough local products are being produced in the region to meet this demand, creating an opportunity for farmers. Additionally non-governmental and quasi-governmental entities, such as the Marquette Food Coop, and Michigan State University Extension, provide a wealth of research, resources, and assistance for farmers wishing to connect with consumers.

Marquette County serves as the regional hub of services for the geographically isolated Upper Peninsula. While Marquette County is more affluent than other counties in the UP, there are still pockets of concentrated poverty. Transportation and household economics are barriers to healthy food access for the populations of Marquette, especially the elderly and those in rural areas. Physical access to food relies heavily on personal car ownership, often requiring long trips to reach a food retail location. The county-wide transit bus system runs on a limited fixed-route hourly schedule and offers door-to-door specialty service, but these services either come at an additional cost to residents or are unavailable at convenient times, and only service a small array of food retail options. Beyond transportation, affordability and the perception of affordability pose challenges for food access in the county. Many families, low-income residents and older adult residents are not fully aware of programs that offset the cost of produce at many of the county’s farmers markets, such as double up food bucks programs and Project Fresh for seniors or that both Supplemental Nutrition Assistance Program (SNAP) and Women, Infants and Children (WIC) can be used at farmers markets.

Over the past 4 years, the Marquette county and city governments, Chocolay Township staff, and several key business and community leaders, particularly the Marquette Food Co-op and Michigan State University (MSU) Extension, have both independently and cooperatively developed a number of plans, policies, programs and projects to tackle these food system challenges, outlined above, and further support opportunities for strengthening the local food system.

Upper Peninsula Food Exchange, Central UP Food Hub, Food Policy Committee, 2012. In the fall of 2012, the Marquette Food Co-op, MSU Extension, and the Western UP Health Department collaborated to support local food activities across the UP. This joint effect, called the Upper Peninsula Food Exchange (UPFE) established three regional food hubs with the mission of serving as a resource center for participants looking to be more active in the local food system, focusing on connecting farmers, businesses, policy makers, and individuals. Following a series of focus groups, the UPFE formed the Food Policy Committee. The Committee is tasked with ensuring policy is at the forefront of food system discussion and informs the work of decision makers and the choices of citizens in the UP.

Local Food Supply Plan – A Chapter of the Marquette County Comprehensive Plan, 2013. The Marquette County Planning Commission prepared a Local Food Supply Plan as a chapter of the county’s updated comprehensive plan, which was officially adopted by resolution on September 4, 2013. The plan pursues a vision of a vibrant local food system focusing on enhancing the local economy, improving health and increasing food security, and takes a comprehensive approach in identifying and addressing the gaps in the current food system. The Marquette County Planning Commission uses the Local Food Supply Plan as a reference document to advise decision makers regarding the role of local government in supporting a community-based food system.

Charter Township of Chocolay Master Plan Update, 2015. Beginning in 2010 Chocolay Township staff led a process to update the township’s master plan. Officially adopted on May 18, 2015, the plan update incorporates the concept of resilience according to three systems: community systems, private systems and natural systems. Food is integrated throughout numerous sub-sections of the plan, but the food systems as a whole is called out as ‘critical infrastructure’ much the same way as water, waste and the environment. The plan update explicitly addresses food in sections devoted to infrastructure; managed development and growth; the economy; watershed planning; floodplains, wetlands, dunes and other areas of particular concern; and farmlands, forests, and other productive lands.  The plan details specific administrative and regulatory tasks and capital projects related to improving the local food system, through mechanisms including fiscal incentives and investments for producers, committed human resources for collaborative work with surrounding jurisdictions on food system issues, and zoning ordinance changes.

Chocolay Permaculture Park, 2014. On June 10, 2014, the Chocolay Township government entered into a 5-year land use agreement with the Chocolay Community Farm Collaborative to lease 14 acres of township property to the non-profit for the purpose of preserving the land for public agricultural use or a permaculture park, including “farm incubator plots, large plot community gardens, hoop houses, public u-pick bramble patches, food forest, agricultural support structures, and associated public spaces including trails.” As part of the agreement, the township government is responsible for serving as the fiduciary agent for grants and assisting with grant-writing to obtain funding for the development of the permaculture park as well as programming and educational activities.

Resolution Approving a Commercial Rehabilitation Exemption Certificate for the Marquette Food Co-op Expansion and Relocation, Co-op Resolution 210-2014. Under the Michigan State Commercial Rehabilitation Act 2005, which “affords a tax incentive for the rehabilitation of commercial property”, the City of Marquette passed a resolution to approve a 5-year property tax abatement for the expansion of the Marquette Food Co-op in downtown Marquette. The resolution acknowledges the need for increased food retail options in the city and supports earlier zoning updates by providing for a greater mix of food business uses downtown.

City of Marquette Community Master Plan, 2015. As part of the master planning process, the city of Marquette held numerous community meetings to gain feedback on the vision and goals of the community. The community expressed tremendous interest in local food systems. As a result, the adopted plan integrates food systems goals as part of the public health section, including the goals to: develop and amend regulatory documents to support the local food system; support urban food production; and create more opportunities for access to healthy foods.

In addition to these policies, there are several projects and regulatory changes currently underway within the county government and several local units of government, contributing to the food system change:

[iv] Seeds and Spores, Family Farm About the Farm, http://www.seedsandspores.com/about-the-farm.html